IN UK CINEMAS 27 MAY 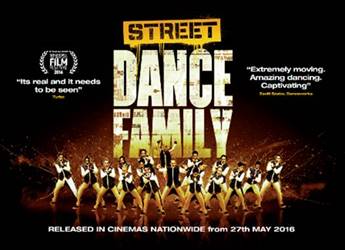 INSIGHT FILMS are proud to announce that their film STREETDANCE FAMILY will be released in UK cinemas from 27th May 2016. Directed by the Award-winning film makers Debbie Shuter (The Veteran, Beigels Already and Adam Tysoe (Educating Haji, Dirtymoney), Streetdance Family is a gripping narrative that will catapult you into the heart of the cut throat world of streetdance.

Entity Allstars, the popular under 16 streetdance crew, who are also Britain’s Got Talent finalists, dream of becoming the first UK team to be crowned world champions. Streetdance Family follows Entity on an extraordinary journey from their training room in Barking, east London, to the Hip Hop World Championship in Germany. As they battle against all odds the trainers, the young dancers and their families, are forced to face their own personal demons and lay everything on the line in their bid for glory on the world stage.

Adam Tysoe and Debbie Shuter said: “Two years in the making, Streetdance Family is a passion project in every sense of the word.  When we first met the crew, we had a hunch they were embarking on an epic journey but we could never have predicted the emotional rollercoaster ride that it would become. It was intense.”