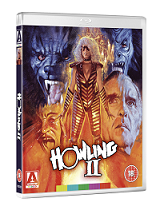 Howling II: Your Sister is a Werewolf is based on the novel by Gary Brandner (The Howling) and was directed by Philippe Mora (Communion, Mad Dog Morgan). It was originally released in 1985 and is now brought to High Definition Dual Format DVD and Blu-ray by Arrow Video.

“You see that dwarf staring at us? Should we follow him?” 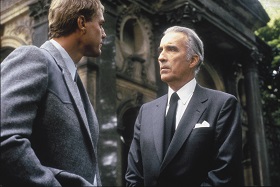 Howling II is set shortly after the end of the first film and starts at the funeral of news reporter Karen White. Outside the church, her brother Ben (Reb Brown – Uncommon Valor, Space Mutiny) is approached by a strange man, Stefan Crosscoe (Christopher Lee – The Hobbit: An Unexpected Journey, Star Wars), an occult investigator. Stefan furnishes Ben with the information that his sister is not dead, a fact which unsurprisingly causes some scepticism. 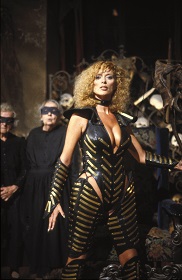 Meeting with former colleague and friend Jenny (Annie McEnroe – Beetlejuice, Wall Street) Stefan tells her that he believes that Karen is now a werewolf and that the others will be attempting to take her body from consecrated ground that very night.

After seeing the video of her transformation they agree to accompany him to the church and then, bizarrely, to take out the leader of all the Werewolves, Stirba (Sybil Danning – Halloween, Grindhouse). 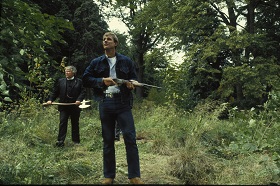 Armed with an array of bizarre weapons and the knowledge that now Silver is not enough, you need Titanium to kill them, they strike out into rural Transylvania to take out the evil Queen.

There are any number of issues with this film, it’s hard to know where to start. They clearly haven’t burdened themselves with the need to follow any actual lycanthropy lore, undead werewolves from Transylvania, who can be killed by Titanium. 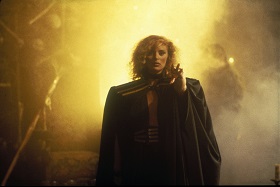 All that aside, in true horror style it is almost bad enough to be good and it is, against all my better judgement, quite entertaining to watch.

“For it is written,  the inhabitants of the Earth have been made drunk with her blood. And I saw her sit upon a hairy beast and she held forth a golden chalice, full of the filthiness of her fornication.” 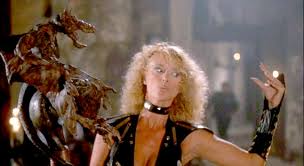 The Howling II: Your Sister is a Werewolf is available to buy now on Dual Format DVD and Blu-ray