4 stars for this inspirational but tragic biopic of a rock and roll star. 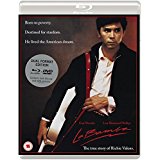 La Bamba was originally released in 1987 and is written and directed by Luis Valdez (Zoot Suit, The Cisco Kid). To celebrate the 30th anniversary of it’s release, it is now available for the first time in the UK on digitally restored Blu-ray Dual Format.

It represents the first major film role for Lou Diamond Phillips (Young Guns, The Big Hit) who is excellent as Ritchie Valens and features music by the brilliant Los Lobos.

“I’m going to be a star. Because stars don’t fall out of the sky, do they?” 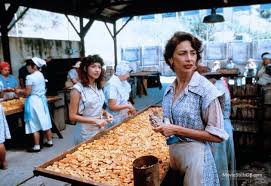 La Bamba is the story of Richard Steven Valenzuela (Lou Diamond Phillips), a normal Mexican American teenager living in poverty in tents on a fruit plantation with his mother, Connie (Rosanna DeSoto – The Bold and the Beautiful) and girlfriend Rosie (Elizabeth Pena – Rush Hour, Transamerica). 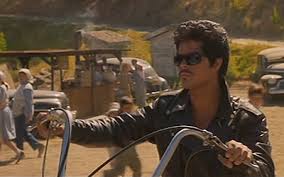 One day their lives are changed by the return home from prison of his half brother Bob (Esai Morales – Rapa Nui, From Dusk Till Dawn: The Series). He has somehow managed to get together enough money to get a small house and they all head off to move in. Unfortunately in the process he also steals Richard’s girlfriend.

Not to be deterred, he turns his sights to the new girl, Donna (Danielle von Zerneck – Living In Oblivion, Recovery Road) who is thrilled by the attention, unlike her father, who is not remotely impressed with his little girl seeing a Mexican American. 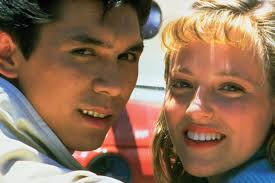 Richard’s one passion in life is his music, never going anywhere without his guitar and after plating a number of gigs he is spotted by music producer Bob Keane (Joe Pantoliano – The Matrix, The Fugitive), who recognizes his talent, signs him up and changes his name to the now familiar “Ritchie Valens”. 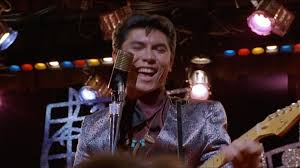 This is an excellent film, well written and concentrating more on family and relationships than the celebrity. It is a sweet but incredibly sad tale of a tragic young life lost with such glorious potential and brings home the impact he had on latin music in rock and roll during such a short career.

Beautifully done and with a great soundtrack this remastered version is well worth adding to your collection.

“The sky belongs to the stars, right?”

La Bamba is available to buy now on Dual Format DVD and Blu-ray.