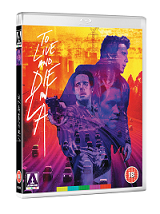 To Live and Die In L.A. was originally released in 1985. It is based on the novel of the same name by former U.S. Secret Service agent Gerald Petievich, who co-wrote the screenplay with director William Friedkin (The French Connection, The Exorcist).

It is an intense and uncompromising look at law enforcement on the mean and gritty streets of Los Angeles.

Richard Chance (William Peterson – Fear, Manhunter) is a U.S. Secret Service agent whose partner Jim Hart (Michael Greene – *batteries not included) is about to retire. Unfortunately, in eighties crime thrillers only having three days left on the job is inevitably a death sentence and this proves to be the case for poor old Jim. While investigating a counterfeiting operation at a remote warehouse, he is spotted by the evil Eric Masters (Willem Dafoe – Spiderman, Platoon), whose bodyguard shoots him dead.

When Richard finds him dead, he embarks on a reckless campaign to take down Masters regardless of the consequences, much to the annoyance of his new partner John Vukovich (John Pankow – Mad About You, Monkey Shines) who wants to do everything by the book. 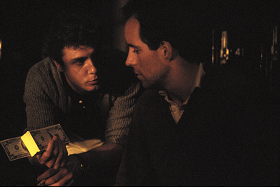 To Live and Die In L.A. is a brutal film, which doesn’t pull any punches. The characters are flawed, they make mistakes and they pay for them and the action is fast paced and intense with some excellent stunts and featuring an award winning car chase. The soundtrack is a bit strange to modern ears, but I’m sure that when it was made it hit the spot perfectly. The conversion is very good, with sound and visuals coming across brilliantly.

With a whole host of special features, this one is well worth adding to your crime collection.

“Why are you chasing me?”

“Why are you running?”

“Because you’re chasing me!”

To Live and Die In L.A. is available to buy now on Dual Format DVD and Blu-ray.