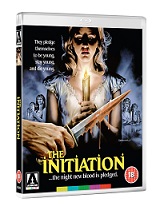 The Initiation was written by Charles Pratt Jr. (General Hospital, All My Children) and directed by Larry Stewart (Buck Rogers in the 25th Century). It was originally released in 1984 and is now available in High Definition for the first time from Arrow Video. 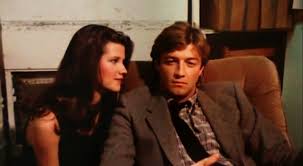 Kelly has gone to University to learn a little about the real world, outside her privileged lifestyle. Plagued by nightmares ever since she was young, they have now increased in frequency, leading her to teaching assistant Peter Adams (James Read – Beaches, Legally Blonde), who is interested in dreams and wants to try to help her decipher what they mean. 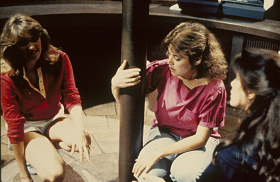 She has joined a sorority, Delta Rho Chi, as a pledge. Along with fellow pledges, Marcia (Marilyn Kagan – The Ladies Club, Foxes), Alison (Deborah Morehart – Sharkman, Longshot) and Beth, they have undergone most of their challenges and now face “Hell week” which culminates in Prank Night, as decreed by the very nasty Megan (Frances Peterson – The Trip to Bountiful), their pledge trainer. 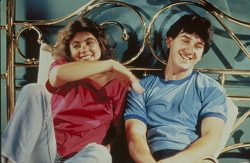 This year, Megan has had a great idea for a prank. Kelly is to steal the keys to her father’s department store, let the pledges inside and then they will have one hour in which to steal the night watchman’s uniform.

It all sounds very straightforward, but Megan and three of the boys from their year sneak in to frighten them, locking the doors behind them. With all of the teenagers locked inside the huge building and no sign of the night watchman, it becomes apparent that Kelly’s dreams may hide some very dark secrets, they are not alone and someone is out for blood. 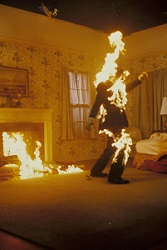 The Initiation is the most eighties film I have seen for ages. I was genuinely worried at the start as they carried candles with naked flames past acres of hairspray and spiral perms, but luckily, there were no casualties.

This is a classic slasher flick, with a great story, a very surprising twist and some pretty enthusiastic acting displayed by all concerned. The special effects are gory, the soundtrack is electronic and the outfits are skimpy and quite outrageous. It is a thoroughly enjoyable watch, recommended for any eighties horror fans and well worth adding to your collection.

“Here’s to being young, staying young and dying young…”