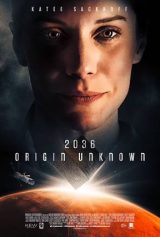 From producer,writer, director Hasraf Dulull (The Beyond). Following on from his first full length feature he brings us a pure Sci-Fi film. He shows his love for this genre in this high concept “which came first, the chicken or the egg?” film. His talent as a visual effects artist are well displayed in the parts where star Katee Sackhoff (Oculus, Riddick, Battlestar Galactica) isn’t stealing the scene. Awesome Sci-Fi writing and directing.

It’s 2030 and the first manned expedition to Mars  ‘Martian One’ is getting under-way. This is also an epic occasion as for the first time ARTI (Steven Cree, Churchill) is on board. ARTI is an artificial AI and he is in control of the mission, but Mr Wilson is the lead scientist and the human in control of this 80 day mission to the red planet. This is all possible because the ARTI invented Hyper-Light Communication,so now communication with Earth is in real time, which pushes

Eighty days later Martian One reaches the atmosphere of Mars and as they descend they encounter a strange magnetic anomaly which brings the ship down.

Six years later and ARTI is a trusted member of the space program and it is about to launch a lander on Mars to investigate Martian One’s demise. Since the Martian One incident the United Space Planetary Corporation (USPC)

made wide scale redundancies to implement A.I controlled missions, only a handful of human staff are retained as supervisors. The one for this mission is Mr Wilson’s daughter and the main protagonist of this film, the wonderful Mackenzie ‘Mack’ Wilson (Katee Sackhoff). She and ARTI must work together to launch the lander and complete their mission.

ARTI is on the ball all the time and he has set in motion the launch five hours early which is a shock to Mack who contacts her sister who is head of USPC and she is told that ARTI is the mission controller and his decision will stand.

Mack has an uneasy relationship with ARTI, not believing he is fully functional or trustworthy. But he did call the launch right as there is a huge sand storm approaching the landing zone. But ARTI cannot call it all the time as the lander has a fault and it is the human that solves the problem before it is destroyed. One up to Mack.

Once the lander is out, Arti takes control and heads for the crash site. There was

no surviving that crash. ARTI discovers another magnetic disturbance which he labels as the ‘Origin Unknown’, Mack uses the orbiter to look at the surface and what they see takes Mack’s breath away. A huge cube that hasn’t been seen by any of the dead rovers lying scattered all over the surface of Mars.

What could this cube be and what will it mean for mankind and A.I.?

2036 Origin Unknown is a first class Sci-Fi film for the true fans of Science Fiction writing and with Hasraf Dulull‘s history with visual effects, this has all the whistles and bells of a true piece of fiction to stand out from the rest.

2036: Origin Unknown is available on DVD and iTunes