4 stars for another nail biting installment of Bleach. 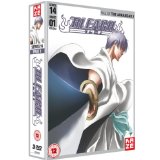 Usual spoiler alerts apply, if you haven’t seen the previous episodes of Bleach, don’t read on unless you want to risk finding out what happened!

As the previous installment was set mostly in Hueco Mundo, so this one takes place mostly in the fake Karakura town. Alas it seems we must wait to find out the fate of Kenpachi and Byakuya, fighting Yammy in Hueco Mundo and of Renji, Rukia, Orihime and Uryū, all left behind by Ichigo. 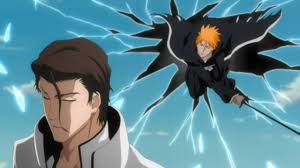 The story takes up just as Ichigo emerges from a Garganta directly behind Aizen in order to launch his attack. He has however greatly underestimated the reactions and power of Aizen, who easily dodges his attack.

This is of great concern to Ichigo, as he realizes he may have lost his chance to fight him without being under the influence of his Zanpakutō, Kyōka Suigetsu, which allows him to alter the perceptions of anyone who has seen him activate it. 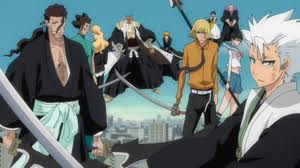 However, the Visoreds and those captains of the 13 Court Guard squads still capable of fighting step up and declare that they will do everything in their power to assist Ichigo in defeating Aizen.

Each of the captains makes their attempt to take on Aizen, to provide an opening for Ichigo to make his move, even Yamamoto, the Head Captain, whose attack should easily be sufficient to defeat him, being the strongest Shinigami for centuries and Hitsugaya, in total freak out mode. But Aizen is proving too much of a handful, meaning that to stop him still falls to Ichigo. 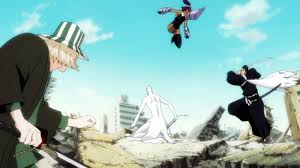 With Gin still on the battle field, this will be no easy task, but the stakes are raised even higher with some truly shocking revelations for Ichigo and the unexpected introduction of Kisuke Urahara and Yoruichi to the proceedings.

This series is exciting and full of surprises and shocks, however, this would also be my only complaint about it. Bleach have a habit of dropping a bomb shell and then casually throwing in a few episodes that have nothing to do with the ongoing story-line. 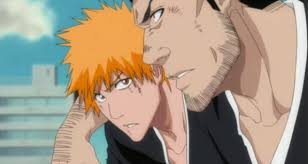 For example, after a massive revelation about Ichigo we have two episodes to promote and set up the film Hellverse. And the very last episode of this part of the series is a New Year episode rather than the cliff hanger one might expect.

Having said that, it doesn’t spoil it necessarily and they are all very entertaining, just a little frustrating when you are getting caught up in the story. Several of the episodes contain flashbacks as well, handy little reminders of previous events in this massive story.

Great watch and as ever we are left hanging on a thread wondering what will happen in Part 2. Bring it on!

“What are you so afraid of Gin? Reason exists primarily for those who count on it to survive. Well, shall we go? Toward the end of all reason.” 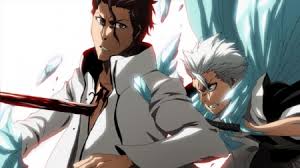 Bleach Series 14 Part 1 is available to buy now on DVD.