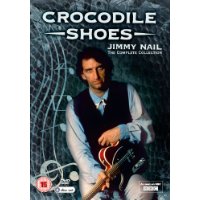 Crocodile Shoes was first shown on BBC One in 1994 and was written by the star, Jimmy Nail (Auf Wiedersehen Pet, Spender) who also had a successful music career on the back of the series.

This tells the story of Geordie factory worker Jed Shepperd, played by Jimmy Nail, who operates the “magic lathe” for a living, but writes country music for a hobby. When his sister Emma (Melanie Hill – Waterloo Road, Stardust) sends copies of his demo tape to record companies in London, his talent is spotted by Ade Lynn (James Wilby – Maurice, Gosford Park). With the prospect of redundancy on the horizon, Jed is forced to make a big decision, does he leave his old life behind and try to make it big in the country music scene, or stay in Newcastle to face an uncertain future? 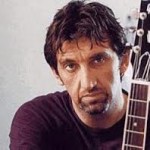 And so he is plunged into a whole new world, living with Ade, who is busy fighting it out with his girlfriend Caroline (Alex Kingston – Dr. Who, Marchlands) who he finds out has been sleeping with his boss Rex Hall (Brian Capron – Where The Heart Is, Coronation St.) and at the same time taking drugs with his manager buddy Danny (Peter Wingfield – Holby City, 24) and trying to avoid the dealers to whom he owes money.

And so begins a roller-coaster ride for Jed, from Newcastle to Nashville, through all the ups and downs which go with fame and fortune.

The chart topping sound track features 5 tracks written by Paddy McAloon (Prefab Sprout) and vocals by Jimmy Nail. The acting is good, as is the script, this is a great series, very enjoyable and with catchy, memorable tunes thrown in for good measure.

It does feel very 1990s, before the advent of political correctness, when it was okay to show someone taking a line of cocaine, swigging back a can of beer and then hopping into a car and driving off.

The main problem with Crocodile Shoes is the conversion. As far as I can tell, they have pretty much just copied it straight from video to DVD. It doesn’t look like they even bothered to dust it off first, certainly the picture quality hasn’t been improved any.

Despite the poor conversion however, this is still a great series, which still stands up today and is well worth a watch. 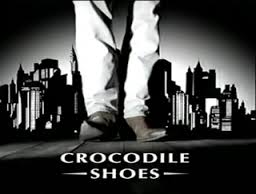