Thoroughly compelling from start to finish, 5 stars all the way. 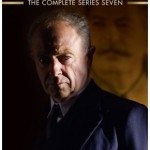 Foyles War Series 7 is created and written by Anthony Horowitz (Midsomer Murders, The Gathering), the writer of the previous six seasons and is every bit as powerful as they were.

In series 7 we see a very different turn of events for Foyle as he finds himself working for British Intelligence and embroiled in the newly developing Cold War.

Caught up in the intrigue and back biting of the spy network, Foyle quickly establishes his authority and proves time and again why he is one of the best detectives in the business, all the time trying to put his old team back together.

The acting is absolutely magnificent, starring Michael Kitchen (Out Of Africa, GoldenEye), whose performance is fantastic, quiet and understated, but at the same time emotional, funny and always very powerful. Foyles War also stars Honeysuckle Weeks (The Wicker Tree, My Brother Tom).

The series takes the form of three films, The Eternity Ring, The Cage and Sunflower. All three are brilliant and impossible to leave, if I have any complaint about this it would be that there weren’t more episodes.

There are also 90 minutes of special features, including making of and cast and crew interviews.

I would recommend Foyles War Season 7 to anybody, a fascinating and well acted look at the Cold War and all its implications, from a familiar cast thrown into a new situation.

Definitely one to add to your DVD collection (along with the first six!)