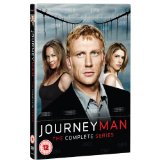 writing pedigree Kevin Falls (West Wing) but unfortunately it only got one season in 2007, but do not let this put you off as it one of the best sci-fi ideas in a long time, well since Quantum leap.

Dan Vasser (Kevin McKidd – Rome) is a reporter with a chequered past of drinking and gambling which keeps his police detective brother Jack (Reed Diamond – 24) on his and Dan’s wife Kate’s (Gretchen Egolf – The Talented Mr Ripley) back, at this point things are going well for the Vasser family as Dan tries hard to get back home to see his young son Zack (Charles Henry Wyson – A Soldiers Love Story) but as strange things start happening to Dan.

Jack thinks he is up to his old tricks and starts butting into Dan and Kate’s life (at this point I would have disowned him).

But what is happening to him is that he is jumping back in time where he finds people with problems that need sorting. Dan takes it upon himself to help these people and he soon finds out that he won’t stop jumping through time until he has helped them all.

Along the way he meets his long-lost fiancée Livia (Moon Bloodgood – The Sessions) who died in a plane crash, but now turns up at the same point in time as Dan and they must help each other solve the mystery’s before them.

As above this is a good watch and well worth investing in.