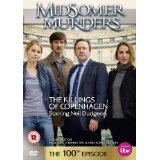 Set partly in Copenhagen as the show is the most popular imported show and will be released as a unique and collectable O-ring packaging.

The story as always will keep you guessing the full 89 minutes to find out who did it and why. 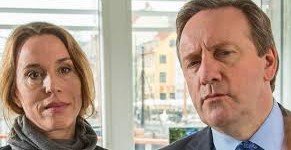 The Calder family run a successful biscuit factory and it has put the village of Badgers Drift on the map and it employees are loyal and keen to see the success continue abroad.

But when the owner goes on a business trip to Copenhagen there is a stranger staring up at him, whilst he is on his hotel balcony. When Eric Calder, (Marcus Hutton, Made in Dagenham) arrives at the hotel he is handed a package that he takes to his room, he opens it and it’s a biscuit tin from his factory, but its empty, so he finds it strange and goes out onto the balcony.

Suddenly he feels unwell and this gets worse until…

Eleonora Jorgensen, The Killing) and her number two KA Anna Degn, (Birgitte Hjort Sorensen, Borgen) contact Barnaby, (Neil Dudgeon, Son of Rambo) and soon him and Nelson, (Gwilym Lee, The Tourist) are in the heart of Copenhagen to meet the frosty Poulson and the more accommodating Degn.

When the source of the biscuit tin is discovered to be from the factory that’s famous for its Golden Clusters. Suspicions are thrown back across the water. Badgers Drift is thrown into turmoil as the factory and it’s head creative mind, 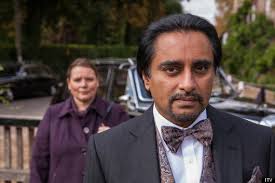 Armand Stone, (Sanjeev Bhasker, Notting Hill) the creator of the Golden Clusters vies for the now vacant head job, whilst the grieving widow Penelope, (Caroline Goodall, Cliffhanger) moves to have her husbands brother, Julian, (Adrian Lukis, The Trench) move into the family bed, much to the disgust of their son Harry, (Jonathan Barnwell, Ripper Street tv) who is much more intrested in the young waitress (Poppy Drayton, Downton Abbey) down at Mrs Trouts Tea room.

With much intrigue and back stabbing you will be accusing everybody at some point as Barnaby tries to concentrate on the job while his wife Sarah, (Fiona Dolman, Ways to Live Forever) is heavily pregnant and he promises to be at the birth.

A great way to spend an hour and a half at the weekend a must for the Barnaby fans.

Available to Buy on DVD on the 7th April.