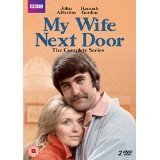 From the idea by Brian Clemens (The Avengers, The Professionals) and the pen of Richard Waring Marriage Lines, Not in Front of the Children), comes the 1972 BBC hit comedy show. From a time when things were very different around the subject of divorce, a lengthy process back then. 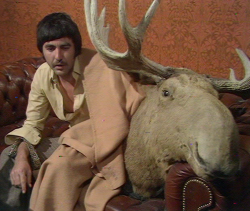 Last night George threw a divorce party, he wakes up on the sofa with the main reason (that isn’t human) for the divorce, the moose head that he has shared the sofa with.

Meanwhile Suzy picks the latest fashion for turning up at the courthouse (ergh 70’s fashions). She leaves the courts with her solicitor but she doesn’t look that happy, neither does George who is lurking outside.

George wants to get away from it all and his secretary Liz suggests the cottage in the country that he had seen before, he thinks it is a marvellous idea and heads down there and he is soon moved in and wondering who will take the vacant house next door. 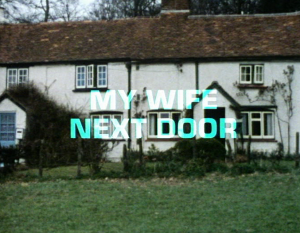 There is a clue in the title, his ex-wife but still married until the decree is sealed. Prepare for 13 episodes of great British comedy with lots of laugh out loud moments. See them snipe at each other and the consequences as they run through good and bad memories and how they and their friends are going to handle them living next door to each other.

A different world the 70’s, so sit back and enjoy the time travel.