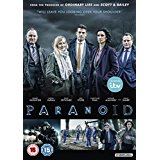 Paranoid is written and created by Bill Gallagher (Lark Rise to Candleford) and produced by Tom Sherry (New Tricks, Scott and Bailey) and was first shown as a TV mini series.

“Hands across the water…”

The good folks of Woodmere are thrown into turmoil, by a brutal murder in broad daylight. A young mother and local GP, Angela Benton (Emma Bispham – Strictly Confidential) is stabbed to death in front of her son at the local children’s play area. 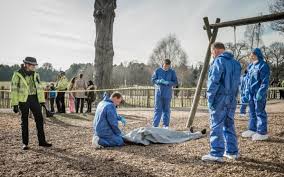 It is up to the Woodmere police to determine who was to blame, but this job is somewhat outside their usual experience. The chief, Michael (Neil Stuke – Sliding Doors, Silk) is under enormous pressure to get a result and thanks to a very detailed description from witness Lucy (Lesley Sharp – From Hell, The Full Monty), they soon find a suspect, Jacob Apply. 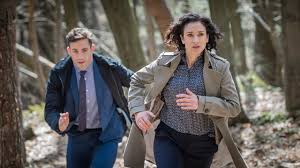 He is a paranoid schizophrenic with psychotic tendencies who seems like an ideal candidate until he too is found dead after seemingly falling from a bridge. Detectives Nina (Indira Varma – Game of Thrones, Rome) and Alec (Dino Fetscher – Banana, Now You See Me 2) have their work cut out trying to juggle their professional obligations and their burgeoning romance, while Detective Bobby (Robert Glenister – Law and Order: UK) is wrestling with anxiety attacks and medication. 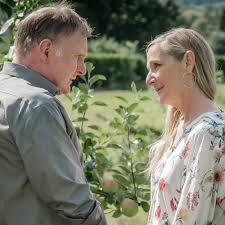 The discovery of a bogus detective interviewing the witnesses and the arrival of a package for Bobby urging them to look into Angela Benton’s past lead them to believe there is more to this investigation than meets the eye. The mysterious man is soon dubbed the Ghost Detective (Kevin Doyle – Downton Abbey, Happy Valley) and he leads them to contact their charismatic counterparts in Dusseldorf, Linda (Christiane Paul – In July) and Walti (Dominik Tiefenthaler – Gossip Girl), who will attempt to help them get to the truth. 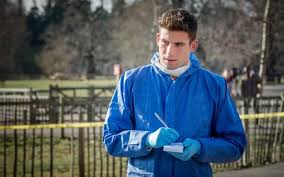 Paranoid is a really enjoyable series. It has a fabulous and well experienced cast and this is well demonstrated by the acting performances, which are superb. The story is compelling, keeping you engrossed right to the shocking conclusion and certainly pulls no punches.

It would probably have received 5 stars, however the final episode did feel a little rushed and there were just a few little loose ends which were not quite satisfactorily tied up for my liking. Still great to watch though and certainly worth adding to your collection.

“A young mother who knew that just typing those words would put her life in danger and she still did it. We have to come back to that Bobby.”

Paranoid is available to buy now on DVD.