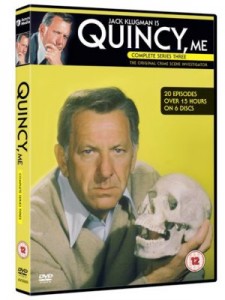 4 Stars because of the conversion.

That is all you need to know about about the god that is Quincy, the LAPD’s medical examiner, where bodies are brought into the morgue and Quincy takes a personal interest in all his cases, much to the annoyance of his boss Dr Robert Asten (John S Ragin – Star Trek: The Next Generation)  and he all ways throws a spanner in the works for Homicides Lieutenant Frank Monahan(Garry Walberg – The Fugitive)  as it’s never the open and shut case that he wants.

With his faithful side kick Sam Fujiama(Robert Ito – Kung Fu) they wade their way through the myriad of dead ends false leads and eventually bagging their man or woman.

Quincy M.E ran for 8 Seasons and this is the third instalment of 20 episodes that just goes to show why it had such a long run.

The only reason this didn’t get 5 stars is because of the Conversion. There is no conversion, it looks exactly like the telly version.

Quincy M.E is a God.  and he deserves far better, stop cashing in on his name and give him a decent burial by showing in a crystal clear light.