This is just excellent, 5 stars for this little gem 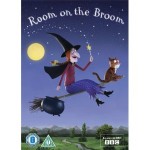 Room On The Broom is an animated short (running time 25 mins), written by Julia Donaldson, illustrated by Axel Scheffler and directed by Max Lang, the same team that brought us The Gruffalo.

“How the cat purred and how the witch grinned, as they sat on their broomstick and flew through the wind”.

Room On The Broom tells the story of a kindly witch, who allows various animals who have helped her to join her on the broom, much to the annoyance of her cat.

The film is very well narrated by Simon Pegg (Hot Fuzz, Shaun Of The Dead) and features a whole host of stars voicing the characters. Gillian Anderson (The X-Files) plays the witch and Timothy Spall (Love Bite, The Harry Potter Films) is particularly amusing as the dragon. Also starring are Rob Brydon, Martin Clunes, Sally Hawkins and David Walliams.

Room On The Broom is hilarious, I laughed out loud several times. Children will absolutely love both the clever rhymes and the cute animation style, which suits the story perfectly. There is plenty of humour too, enough to satisfy adults who are watching this with their kids.

A joy to watch, definitely one for all the family!

Room On The Broom is available to buy now on DVD.