4 stars for this thrilling and tense ITV drama. 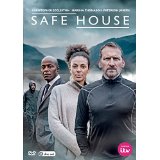 Safe House is written and created by Michael Compton (Silent Witness, Code of a Killer) and directed by Marc Evans (Snow Cake, Hinterland), cornerstones of the British drama scene and with such an excellent pedigree, hopes at Roadrash were high for this series. Happily, it delivered in spades. 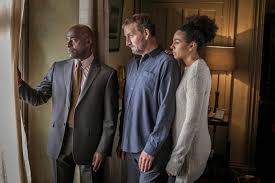 Robert (Christopher Eccleston – Doctor Who, Thor: The Dark World) and his wife Katy (Marsha Thomason – Lost, White Collar) have moved to the Lake District and are running a guest house. Robert is an ex police office who was shot in the line of duty and the move is their attempt to rebuild their lives and start a family.

However, when Robert’s friend and former boss Mark (Paterson Joseph – Aeon Flux, The Beach) comes to him at a surprise birthday party with a proposal, he realises that he misses the job far more than he thought. 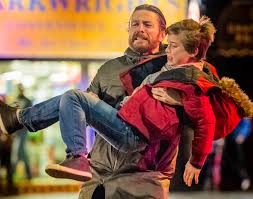 Mark believes that the guest house is in an ideal situation to become a safe house, especially given Robert’s training and excellent police record. Although Katy is opposed to the idea to start with, when Mark contacts them with details of a family in need of somewhere to hide, they agree to take on the job.

The family in question were in Blackpool on an outing when their son Joe (Max True – Campbell’s Journey) was snatched. His father David (Jason Merrells – Clocking Off, Cutting It) is able to save him, but is severely beaten in the process. 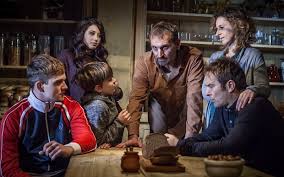 Mark believes, given that David is a prison officer that he and the rest of the family, wife Ali (Nicola Stephenson – All At Sea, Holby City) and daughter Louisa (Harriet Cains – Human Beings, In The Flesh) are in immediate danger of further attack from a disgruntled ex-convict, so off they go to the Lakes.

Also missing is son Sam (James Burrows – Eden Lake, This Is England) who is mistakenly believed to be safely studying away at University. It would seem that this family are not the only ones with secrets to hide. As Robert begins to remember what happened on the night he was shot, doubt is cast on what he believed and was told was happened and he starts to re-investigate. 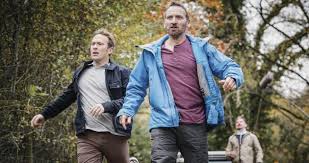 Set against the beautiful yet bleak backdrop of a rainy Lake District, Safe House is packed with atmosphere. The characters are well written and the story is carefully thought out and genuinely surprising in places. My only complaint is that I don’t think that some of the twists are quite as well hidden as they were supposed to be. But overall, there’s no way you’ll work out where all the intricate little parts of the story are going.

This is a quality drama, well worth a watch and almost certainly worth watching again, knowing where the story is going will help to pick up different stuff the second time through.

Any crime/drama/thriller fan should have this in their collection.

“She was ill, with drugs. She liked to be by herself. Some people are like that.”