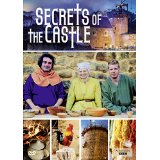 Once again the BBC show the way to go in fun education with 5 hour long episodes that are a delight to watch. You don’t even realize that you are learning, but what you do pick up you will be passing on in no time at all.

In Guedelon, Burgundy, France a project has been running for 17 years of a 25 year plan, to build a Castle from scratch using only the tools and skills of 13th Century tradesmen and women.

For 6 months the BBC send Historian Ruth Goodman and Archaeologists Peter Ginn and Tom Pinfold who will learn and work alongside the highly skilled artisans assembled to take this project through its 25 year endeavour.

Each episode covers a different aspect of the build from the building of the 4m thick walls and how the master mason grades the sandstone into the best facing stone (Piff), the secondary stone (Paff), and the soft infill stone (Poof), to mixing the tons of lime mortar to build 14m high walls. Ruth (War Time Farm, Tudor Monastery Farm) meanwhile sorts out their hovel and

cooks up the vegetables that the workers would have eaten in the 13th century and examines the difference between them and what was served up in the manors kitchen for the Lords and Ladies.

As part of the experiment they see the importance of every skill that is needed to build a castle from scratch,

even from the site of the castle to be where every raw material is at hand (Stone,Clay, Water, Limestone), as well as what it was like to defend a castle and attack one with siege weapons, bows and arrows and the deadly crossbow, which is made from wood and iron coming from the surrounding area. Even the tools have to be resharpened every couple of days.

They will, by the end of it, have a fully functional 13th century working castle and in the six months that they spend there they see parts of the building coming near to completion with lime washed walls with decorative patterns painted on top as Ruth learns how to take the ochre from the local clay and refine it to make the paints.

Another Ace series from the BBC that takes the most enthusiastic historian on TV on a journey of enlightenment as do we as we sit enthralled. Learning how the “daily grind” got easier with the building of a watermill and how these skills could take you all around the world.

Available to order on DVD Now.