In 1998 this was a cutting edge experience with very good special effects and a great cast acting well. 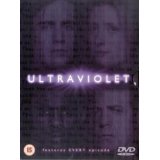 his fiancé Kirsty (Collette Brown – Doctors, Holby City) is thrown into turmoil, but not as much as Michael’s life is about too.

He finds out that vampires exist and that Jack has become one of them, Michael makes the difficult choice of joining a secret government organisation (CIB) where he meets ex soldier Vaughn Rice (Idris Elba – Luther, The Wire) who has a personal vendetta against the vampires, along with Dr Angela March (Susannah Harker – Waking the Dead) who’s husband had died six years ago whilst working on project’s abroad and the Catholic priest Pearse J Harman (Philip Quast – The Devils Double) they convince Michael that the threat of the vampires is real.

At the time this was an exciting new series but time has moved on and the tech looks a little dated now but the effects still hold up and the acting is intense and gritty with plenty of action thrown in as Angela takes a strong roll up against Michaels confused character.

6 great episodes for  your collection.

Special Features include a new retrospective of making of ultraviolet.

Out on DVD now