This series is excellent, 4 stars all the way.

Firstly, if you were a fan of the original series, you will be excited to try this and maybe a little worrried too, I know I was. There is nothing disappointing about V: The Complete Series, it is exciting and fast paced and retains the sense of mystery which we all enjoyed so much the first time around. Although it is a remake of the original series (aired in the 80s) it holds it’s own very well alongside any of the more recent sci-fi offerings.

The basic premise remains the same; Aliens arrive at Earth, publicly offering peace, but privately with a very different agenda. If anything, in the current climate of heightened awareness of the threat of terrorism, the story carries more impact now than it did originally.

The series follows the stories of the members of the Resistance and how they each deal with the moral dilemmas with which they are presented. Among these; the discovery of ‘sleeper cells’ of infiltrating Visitors, present on Earth for many years and establishing themselves in prominent positions in the human community, effectively casting suspicion upon everybody. Also dealt with very well are the various Mother and child relationships.

The cast are excellent, as is the acting, Elizabeth Mitchell – Lost (playing Erica Evans) and Morena Baccarin (playing Anna – the Leader of the Vs) are particularly good and fans of the genre will find plenty of familiar faces, Joel Gretch – 4400 (playing Father Jack), Lexa Doig, Alan Tudyck, among others.

Any fans of the original series wil be very happy to see a couple of brilliant (and very direct) homages, seemingly a hats-off to their predecessors and a most welcome addition.

Because it has been so well brought up to date, V: The Complete Series will also make great viewing for any newcomers to the story, in fact, in some ways I envy the voyage of discovery which awaits them.

The visual effects and make-up are at times nothing short of spectacular and bring a new dimension to the story which simply wasn’t possible in the 80s. 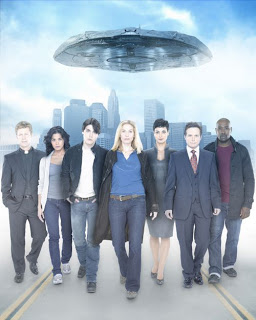 The special features are relatively short, but that is not always a bad thing! Fans of directors commentary may be litttle disappointed that it is available only for one episode, but otherwise they seem fairly comprehensive and informative.

In summary, they have thoroughly done justice to what was always a brilliant story, and this is a must see for sci-fi fans everywhere!

The DVD is out to buy from November 8, 2010.
You can find out more by heading over to the official website
all images are © 2009 Warner Brothers. ALL RIGHTS RESERVED