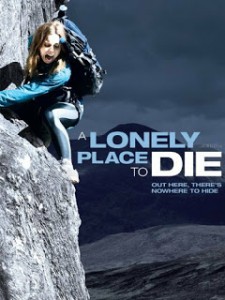 Oh dear. This is definitely not one of the better films I have seen, so I have given it 2 stars.

A lonely place to die is a British film, directed by Julian Gilbey (Rise of the Foot Soldier) and this fact is a bit embarrassing really. Upon reading the synopsis we were rather excited and looking forward to watching the film, as the concept sounds very interesting, hence the 2 stars.

However, it quite spectacularly missed the target when it came to converting the idea into a film. Although A Lonely Place to Die features some well respected acting talent, including Melissa George (30 Days of Night, Triangle), Ed Speleers (Eragon, Witchville), Eamonn Walker (Unbreakable, Tears of the Sun) and Sean Harris (Harry Brown, Isolation), the lack of a sensible script, a plausible story line and any form of character generation makes it very difficult for the actors to bring anything good to the table.

The premise of the film, that a group of climbers find a young girl buried in a chamber in the Scottish Highlands and decide to dig her out and get her to safety, is sound enough but when you see it on the screen it all just seems a bit silly.

There are plenty of special features on the disc, including The Making of a Lonely Place to Die (70 mins approx) and The Challenge of the Alps (Director Julian Gilbey attempts the Matterhorn and the Eiger, 15 mins approx).

All in all I wouldn’t recommend this film to anybody, but if you are tempted then A Lonely Place to Die is available to buy now on DVD