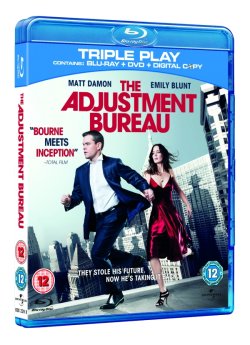 David Noris (Matt Damon: Bourne Identity) is an aspiring New York Senator, but his young age is an issue as are his antics at his school reunion; these lead to his downfall in the election, so he retires to the restroom to prepare his speech. Unbeknownst he is overheard by a mystery woman Elise (Emily Blunt: The Devil wears Prada). They instantly hit off together until his aid Charlie (Michael Kelly: Dawn of the Dead), and the hotel security turn up and spoil the fun.

He doesn’t even get her name but this leads to two mysterious hat wearing men meeting him in a park and arranging for David to have coffee spilt on his shirt, (strange but all is revealed later. This is the start of the intrigue). The hat wearing man, Harry (Antony Mackie: The Hurt Locker), puts a lot of effort into trying to spill David’s coffee but fails allowing David to meet Elise once again. This is all wrong according to Harry’s superior, Richardson (John Slattery: Iron Man 2), but Harry is sympathetic to David’s plight and explains the situation to David, that they are never meant to be together, even if he catches the same bus for three years.

Matt Damon and Emily Blunt make for a great couple in this romantic thriller as this is a love film with sci-fi as the thread running through it rather than running it, the balance is good between the two and should stop either partner falling asleep in the cinema, as their is definitely something for both. Thompson (Terrance Stamp: Wanted) makes a rock solid performance as the “hammer” to sort out once and for all that they should never be together leading to the more sci-fi part of the film.