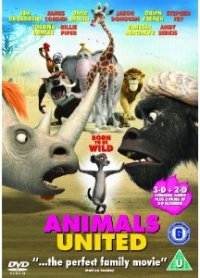 Where to begin? Quite difficult with this one, so let’s start with the stars, or rather star. I am giving this film one star, purely on the basis of the fact that the animation is not bad and that the 3D works and will probably make the film more exciting for children.

Don’t take the awarding of the star to mean that there is anything else about Animals United worth bothering with, however. This film is wrong on so many different levels. Possibly the most disturbing thing about it is that so many reputable British actors were prepared to put their voice talent to it; James Corden, Stephen Fry, Andy Serkis, Billie Piper, Dawn French, Joanna Lumley and many others, which really does beg the question, why?

The film is based on the children’s novel “The Animals Conference” by Erich Kastner, and appears, from start to finish, to be a misguided and badly disguised attempt to brainwash young people into becoming ill-informed eco-warriors. The storyline is ridiculous and implausible even for something designed for young children. A vegetarian lion? I mean, really.

I think the bounds of credibility should only be stretched so far and unfortunately Animals United goes way beyond that. I understand the need to educate the future generation about environmental issues, but educate is the key term here, this film is so far fetched that there could be little learned from it, in fact the overall effect is verging on offensive.

The only special feature included on the disc is a trailer (only on the two disc version), rather disappointing considering the price and 3D glasses are included with the film.

In summary, if your children are very young they will probably enjoy this as a colourful romp involving lots of animals, however, if they are old enough to understand a storyline it might be well worth having a think about what messages you want them to receive, and whether it might not be better to explain these issues to them yourself and just not bother with the film at all!

Animals United is available on DVD