3 stars for this hilarious but thoroughly weird adventure/buddy film. 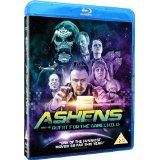 Ashens is written by and stars Stuart Ashen, famous for his YouTube channel, in which he demonstrates, puts down and generally destroys random and worthless tat, (look him up, it’s brilliant).

This film is essentially semi-autobiographical, as he plays his YouTube persona Ashens, who has been collecting for years and now has only one item missing from his ultimate library of rubbish, the GameChild. 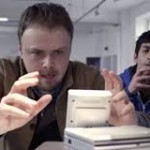 This hand held console was released as a rip off of the GameBoy, but recalled after only two hundred sales on account of burning out retinas and setting fire to fingers.

His arch nemesis, imaginatively named Nemesis (Chris Kendall, another popular YouTube comedian), beat him to the GameChild on it’s first release, but now with only one remaining that wasn’t recalled, the hunt is really on.

Ashens is assisted in his his quest by The Professor (Robert Llewellyn – Red Dwarf, Junkyard Wars), with whom he fell out after losing his girlfriend Ashley (Millie Reeves – The Trap) to him.

Also tagging along is his very bizarre and dysfunctional friend, Chef Excellence (Dan Tomlinson), a failed TV chef who is determined not to give up the whites for anyone.

There are plenty of colourful characters along the way, including the girl who works the archive at the library (the floor falling away scene will bring back many memories for gamers), a strange Frisbee obsessed guide, a contemporary jazz musician known as The Silver Skull and some dubious cheese knife wielding superheroes. There is also a very unexpected cameo by Warwick Davis.

Ashens And The Quest For The GameChild was made on a very low budget and unfortunately this is glaringly obvious for most of the film. The acting is atrocious and the script is pretty nondescript and yet, despite that and against all the odds, it really does work. It is genuinely funny and had me laughing out loud several times.

This is very British humour, which lampoons The Matrix, Monty Python and The Lord Of The Rings in grand style. It will never be a classic but it will gladden the hearts of nerds everywhere.

If you are of the right generation to remember the GameBoy and the various other dodgy bits of technology that were around at the time, then you will almost certainly enjoy this.

And yes, we are all confused about the “s”.

Ashens And The Quest For The GameChild is available to buy now on DVD and Blu-ray.