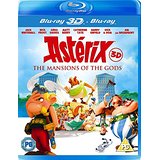 Asterix: The Mansions of the Gods 3D is based on the comic book of the same name and directed by Louis Clichy and Alexandre Astier. It was first released as a French language film and the English dub is now available for the first time in all it’s glorious 3D. 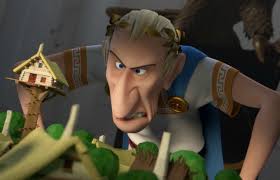 The mighty Roman Empire has swept across the globe, claiming all before it and changing civilizations as it goes. There is, however, one small part of Brittany which they have been unable to conquer. The small Gaulish village steadfastly refuse to bow to the Romans, much to the annoyance of Caesar (Jim Broadbent – Cloud Atlas, Moulin Rouge) back in Rome. 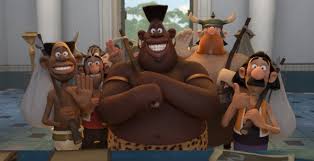 In order to force them into submission he comes up with a bright idea, to build a housing complex in the forest, right next to the village, thus making then part of Roman society. To this end, he hires architect Squareonthehypotenus (Richard Ian Cox – Inuyasha, Geronimo Stilton) to create his masterpiece and along with a Roman Centurion (Greg Davies – The Inbetweeners: Movie) and a load of slaves, they head off to Brittany to make his plans a reality. 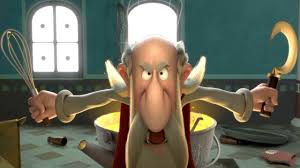 This is where they begin to run into trouble, because Asterix (Jack Whitehall – The Bad Education Movie) and his best chum Obelix (Nick Frost – Shaun of the Dead, Paul) are not about to let them destroy their forest and with the help of Getafix (John Innes – Assault on Wall Street), set about making life as difficult as possible.

As Roman civilisation encroaches, will the Gauls be able to stand fast against the tide of commercialism?

Asterix: The Mansions of the Gods is a very enjoyable watch for the whole family. Just in time for Christmas, this 3D film will keep little ones and adults alike with it’s cute characters and distinctive brand of comedy.

A sure fire winner to add to a stocking, they’ll be watching it long into the New Year.

“I’m going to the Mansions of the Gods. I won’t stay another minute in a village I no longer recognise.”

Asterix: The Mansions of the Gods is available to buy now on DVD and 3D Blu-ray