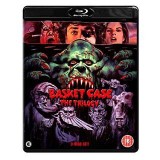 1 star for this enthusiastic but ultimately hilariously naff collection of films.

Basket Case was first released in 1982, followed by Basket Case 2 in 1990 and Basket Case 3 in 1991. All three films were written and directed by Frank Henenlotter (Frankenhooker, Brain Damage). 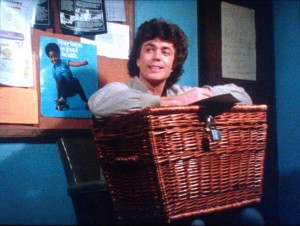 The films tell us the story of Duane Bradley (Kevin Van Hentenryck – Brain Damage, The Absence of Light), a delightfully nerdy and unassuming character who turns up one day to check into the less than salubrious Hotel Broslin.

He is clutching a large picnic basket and the assorted other inhabitants are quite literally dying to find out what is in there. Even in a hotel full of prostitutes, alcoholics and other assorted misfits, Duane is certainly the strangest of them all. 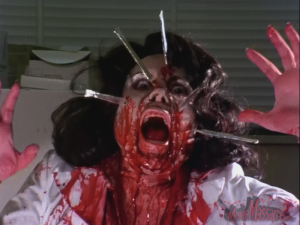 In the basket is his hideously deformed Siamese twin brother Belial, separated from him against their will at the request of their father at age 12, by three doctors, who are now in for the shock of their lives when the two brothers come seeking revenge for the injustices against them.

The second film takes the brothers to the home of their estranged aunt “Granny Ruth” who runs a boarding house for freaks, most of whom put Belial to shame with lots of weird and wonderful abnormalities. 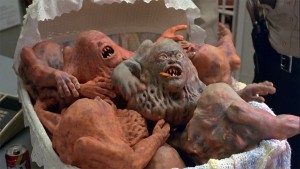 In the third film, entitled “The Progeny” there are, well, progeny, I’ll leave this photo here to say everything else that needs to be said about that.

The low budget for this film is painfully obvious throughout and there are all sorts of elements to it that don’t really come off. Some of the special effects are dubious to say the least, although the claymation stop motion sequence with Belial in the hotel room made me laugh harder than I have for ages, so I suppose I should thank them for that.

It is also a little bit tricky to be frightened of something which looks like a sweet potato with teeth and arms, which doesn’t add much to the fear factor.

There are plenty of amusing devices used to bypass the lack of budget, one of my favourites being shaking the basket and making slurping noises to denote Belial being fed.

In terms of picture quality the first film has no noticeable improvement, however things do pick up a bit with the next two films.

In spite of the low score, if you are a fan of 80s horror then this will be right up your street, with little if any acting, cheap locations and buckets and buckets of mind blowingly fake looking blood. There are also lots of special features, interviews, commentaries and behind the scenes featurettes.

A must own for the die hard slasher flick fan, but be aware, it has not aged well. 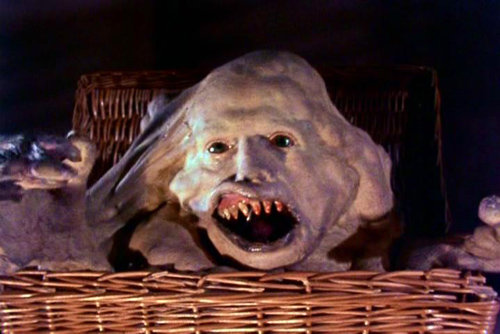 Basket Case – The Trilogy is available to buy now on Blu-ray.