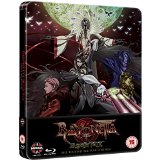 Bayonetta (The Movie): Bloody Fate is based on the smash hit video game, Bayonetta and presented by Studio Gonzo (Hellsing, Rosario and Vampire)).

Bayonetta is a powerful witch who hunts demons for a living, when she isn’t helping out the local funeral director or hanging out at The Gates Of Hell, a bar (and armory) owned by her friend Rodin. 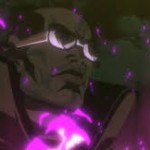 It was Rodin who gave her the name Bayonetta, when she first awakened from her 500 year sleep 20 years previously, with no memory of her life before. He is her right hand man, himself a skilled fighter, who makes her unique sets of guns, Scarborough Fair, consisting of 4 guns, two of them in her shoes.

Just to spice up her life a bit, she is constantly pursued by Luka, a journalist who believes she is responsible for the death of his father and seeks to discredit her and reveal her true nature to the world. 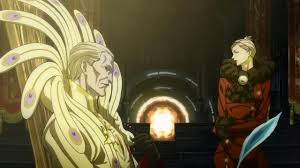 But things are about to change for Bayonetta. With the upcoming predicted “second coming” of the God Jubileus, her past is catching up to her fast, even though she has no recollection of it. The sinister Balder, the head of the Ragna Church is starting to take an interest, as is Jeanne, a mysterious woman who seems to know far more about Bayonetta than she cares to divulge. 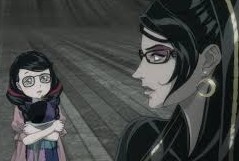 When she encounters a young girl who goes by the name of Ceresa and insists on calling her Mummy, a chain of events is set in place which will lead to an epic final confrontation, with the fate of the world in the balance.

There is a lot to recommend in Bayonetta: Bloody Fate. The animation is very impressive and the fight sequences are both beautiful and mindbogglingly complicated in places. There is no need to have played the game to understand the film, things are all quite well explained for the uninitiated.

As with the video game, it is all gloriously over the top,with a very satisfying retro feel to it, more like the old school anime. Bayonetta’s trick of using her hair to make her clothes and also to cast spells, results in her spending a large amount of time naked, no doubt resulting in a good fan-base of teenage boys.

On the negative side, this is based on a video game and suffers from the same problem as every other game adaptation. The story-line, although good, is a little weak and feels quite contrived in places and it doesn’t grip as much as many of the recent releases.

That said however, it is still a very enjoyable watch and there is no disputing the quality of the animation, or it’s style. 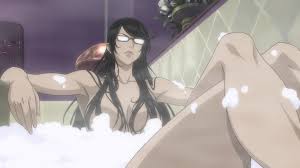 Bayonetta (The Movie): Bloody Fate is available to buy now on DVD and Blu-ray.