4 Stars for a great conversion of the 1986 Cult Classic. 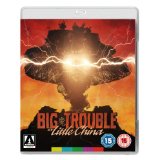 John Carpenter’s, (Escape From New York) classic story of the all American truck driver who becomes a hero.

Jack Burton, (Kurt Russell, Stargate) is the truck driver who hauls pigs to New York’s China Town where he wins more than a thousand dollars off his friend Wang Chi, (Dennis Dun, The Last Emperor). 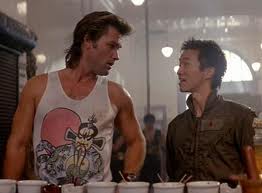 Desperately Wang wants a double or quits bet, which Jack reluctantly agrees to. Jack wins and wants his money.

This leads to Jack taking Wang to the airport to pick up the love of his life Miao Yin, (Suzee Pai, Sharky’s Machine). Wang tells Jack that his girlfriend is unusual for a Chinese girl as she has green eyes.

As they wait in arrivals, Jack sees a very pretty girl who Wang tells Jack that he 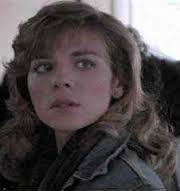 should avoid – Gracie Law, ( Kim Cattrall, Sex in the City).

Suddenly Chinese gangsters appear and snatch Miao and a chase ensues which leads Jack and Wang into the seedier part of China town. Jack’s truck gets stopped by a funeral that suddenly turns into a bloodbath as a rival gang shows up and the bullets start flying. 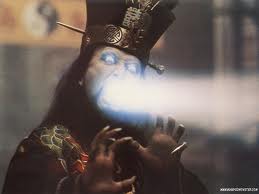 As the fight ensues, our intrepid pair try to hide in the cab, until three men descend from the sky all wearing wicker hats and lightning flying from ones hand, also a 7 foot tall strange man with glowing eyes and mouth, Lo Pan, (James Hong, Blade Runner).

Now Jack is embroiled in a fight of good versus evil with Lo Pan, an ancient spirit locked in his form until he can marry a woman with green eyes.

The Conversion to Blu-ray is great, the picture is crisp as is the sound.

I loved this film when I saw it at the movies and now I can own it on Blu-ray (Sweet).

With sword, sorcery, guns, green explosions, drama and comedy how can it go wrong?

With loads of extras: 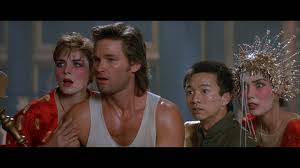 Available to Buy on Blu-ray and Steelbook Now