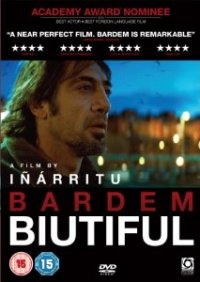 Biutiful is a bowl of broth that has been blitzed until it is difficult to wade through. Uxbal (Javier Bardem, No Country For Old Men, Vicky Cristina Barcelona) is the only thing that makes your way through his life as a small time crook, worth while; he’s into drugs, knock-off’s and human trafficking; never mind the trouble he has with his wife who has serious issues; especially with the bottle and Uxbals’ brother. This makes looking after his two children even harder as his time is taken up with trying to improve the lives of all those around him.

The idea is there but the application isn’t for the average film goer, this is for the serious punter who is used too being tied to their chair and have their eyes held open with matchsticks, and someone shouting “run VT”.

The director Alejandro Gonzalez Inarritu (Amores Perros, 21 Grams), has thrown so much of himself into directing this film that I think he forgot to let go of it at the appropriate moment, as each act just seems to be slightly to long and involved; all that said Javier is the most excellent actor around at this time, he is just so realistic in what he does that it seems more of a fly on the wall documentary than a man acting, and those around him support that role well.

Biutiful is a magnificent film if you brought your water-wings to stop you sinking halfway through, but for most it is just to difficult to wade through.

This is why I give the film 3 stars, Javier gets 5+ for his performance, the editor should have been a bit happier with his scissors and then may be it would appeal to a wider audience.