4 stars of glossy and beautiful looking fluff for kids. 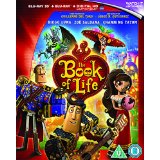 The Book Of Life is written and directed by Jorge R. Gutierrez (Mad, El Tigre: The Adventures Of Manny Rivera) and produced by Guillermo Del Toro (Pan’s Labyrinth, Hellboy).

The Book Of Life begins in a library, where we see Mary Beth (Christina Applegate – Anchorman: The Legend Of Ron Burgundy, The Big Hit), a magnificently patient museum guide who takes on the task of giving a tour for the more difficult kids.

She introduces them to The Book Of Life, a tome in which all the stories in the world reside. As it is Dia de Muertos (the Mexican Day of the Dead) she decides to tell them the story of La Muerte (Kate Del Castillo – No Good Deeds) and Xibalba (Ron Perlman – Hellboy, Drive), the deities in charge of the two realms of the afterlife, the Land of the Remembered (a beautiful and joyful place for those who remain in the hearts of the living) and the Land of the Forgotten (a dark and miserable place for those who no-one remembers). 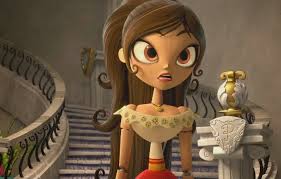 The two decide to make a bet on the outcome of the lives of three mortals, Maria (Zoe Saldana – Avatar, Guardians Of The Galaxy) and her two suitors, Manolo (Diego Luna – Elysium, The Terminal) and Joaquin (Channing Tatum – The Lego Movie, 21 Jump Street). If Manolo marries Maria then La Muerte will win the bet and Xibalba will no longer be able to interfere in the lives of mortals. However, if Joaquin marries Maria then Xibalba wins the bet and La Muerte will be forced to relinquish control of the Land Of The Remembered.

Maria is sent away to Europe by her father (Hector Elizondo – Pretty Woman) for freeing animals to run riot around the town of San Angel (including a very amusing baby pig called Chuy) and Manolo and Joaquin continue with their lives and prepare for her return. 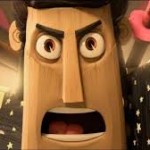 Manolo is a member of the Sanchez family and as such is expected to become a bull fighter. However, he doesn’t approve of killing the bull and wants nothing more than to do as Maria told him and follow his dream of becoming a singer.

Joaquin on the other hand loves to fight and has become a local hero, famous for slaying bandits and protecting the weak,with the help of the Medal Of Eternal Life, given to him by Xibalba in order to sway the result of the bet. 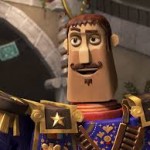 Upon Maria’s return she is faced with a difficult decision as her future and the fate of the afterlife depends on who she takes for a husband. The problem is made all the more immediate by the fact that the bandit Chakal (Dan Navarro – Family Guy, American Dad) the previous owner of the Medal is coming to attack the village and take it back. 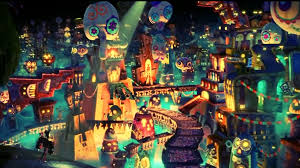 The Book Of Life is most certainly a stunning looking production, the animation is nothing short of amazing, however I felt in quite a few places that more could have been done with the 3D aspects. The backgrounds are so detailed that they are simply mind boggling and I can easily imagine children being completely blown away by it all.

In true Guillermo Del Toro style, there are decidedly sinister elements to the story and the animation, which will be quite disturbing to younger viewers, but offset with plenty of upbeat moments. The music is also very interesting, with some unusual choices of songs performed by the characters.

All in all, this is a very polished film, not massive on story-line or emotional content, but full of healthy messages without being too moralistic and thoroughly glorious to look at.

“Kids these days, with their long hair and not killing stuff.”