This is a very enjoyable film to watch and I have given it 4 stars. 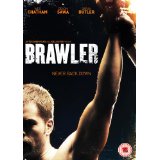 Brawler tells the story of a NCAA champion wrestler who is imprisoned for 10 years following an unfortunate incident resulting in the death of a police officer.

He is released on parole only to discover that his best friend is in deep trouble over gambling debts and the only way he can help is by getting into cage fighting.

The film follows our hero as he struggles to fit in within a system which requires him to go against everything he stands for and throw a fight.

Brawler is directed by Jason Connery (Shanghai Noon, Night Skies) and written by Adam Mervis (Choices, The Shakespeare Theorem), who also stars in the film. It was originally released to cinemas under the title The Philly Kid, but comes to DVD as Brawler (not be confused with the Russian film of the same name).

The script is pretty well written and gives the actors enough to get their teeth into. There are a few aspects of the plot which seem slightly implausible, such as a bent cop holding a grudge for 10 years, you’d think he would have moved on a bit, and our hero leaving prison looking no different than he went in, but not enough to spoil the fun.

This is very entertaining film to watch, the fight scenes are good, and it should prove popular with anyone who is into this genre of film. I would recommend having a look at this one.

Brawler is available to buy now on DVD.