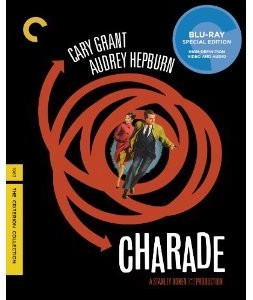 Charade is an excellent film, a real classic and I have given this release 5 stars.

Charade was first released in 1963 and at the time was described as being the greatest film that Alfred Hitchcock never made and having watched it you can certainly see where that came from, it very much has that feel about it. In actual fact Charade was directed by Stanley Donan (Singing in the Rain, Seven Brides for Seven Brothers).

This is a suspenseful crime thriller, set in Paris and starring Audrey Hepburn (Breakfast at Tiffany’s, My Fair Lady) as the young woman pursued by various men who want the fortune that her murdered husband stole. They believe she has it and she believes she doesn’t, this makes for a rip roaring adventure that will have you on the edge of your seat from start to finish.

Also starring are Cary Grant (North by Northwest, Notorious), Walter Matthau (The Odd Couple, Grumpy Old Men) and James Coburn (The Great Escape, The Magnificent Seven). As you can imagine, the acting is every bit as good as you would expect it to be, and the script is excellent, allowing everyone to play to the best of their ability.

The soundtrack for Charade is written by Henri Mancini (Theme; The Pink Panther) and fits the style and feel of the film perfectly.

Also included on the disc is a trailer and photo gallery.

All in all, this will be a fantastic trip down memory lane for anyone who is familiar with the film, and a great experience for anyone who hasn’t seen it before. This is definitely one to watch over and over again, thoroughly recommended for anybody.

Charade is available to buy now on DVD and Blu Ray.