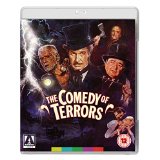 First released in 1963, The Comedy Of Terrors is written by Richard Matheson (Duel, I Am Legend) and directed by Jacques Tourneur (Cat People, Curse Of The Demon).

Beautifully remastered by Arrow Video as part of their Vincent Price series, it tells us the story of Waldo Turnbull (Vincent Price – The Raven, House Of Usher), a struggling undertaker and his hapless assistant, Felix Gillie (Peter Lorre – Casablanca, The Maltese Falcon). 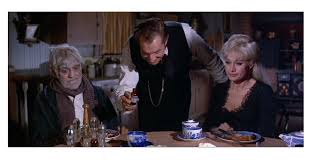 Turnbull finds himself beset from all sides. Married to Amaryllis (Joyce Jameson – The Outlaw Josey Wales, Death Race 2000), an aspiring opera singer with a voice that can literally shatter glass and wake the dead, he is forced to live with her and his father-in-law Hinchley (Boris Karloff – The Bride Of Frankenstein, The Mummy) in return for running the family business. As a result he is almost permanently (and very comically) inebriated, something which Vincent Price plays to perfection. 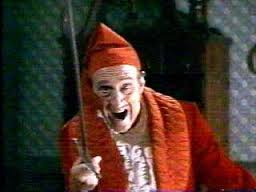 With the landlord Mr John F. Black (Basil Rathbone – Terror By Night, The Woman In Green) breathing down their necks for payment of one years rent, they are forced to turn to somewhat illegal and underhanded practices in order to drum up some business.

With his ex convict but still very reluctant assistant Gillies he embarks upon a cunning plan to slay his landlord and end his troubles. However, unbeknownst to them, he suffers from catalepsy and consequently each time they think he is dead he comes back to haunt them. 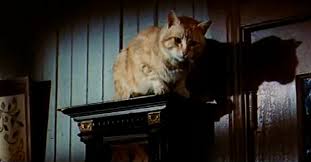 There are lots of things to love about this film. It is a deliciously black comedy, filled with plenty of good old fashioned slapstick and humour. It is extremely refreshing to see these great actors take this script and run with it and Basil Rathbone’s gleeful delivery of Macbeth is a sight to behold, as is his tendency to intone “What place is this?” whenever he comes back from the dead. Kudos also has to go to the cat, Rhubarb, who puts in a stellar performance and is unbelievably well trained.

Included with this release are lots of special features, including Whispering In Distant Chambers: The Nightfall Of Jacques Tourneur, a specially commissioned video essay charting his career. This is an excellent conversion of a great film, and well worth adding to your collection. 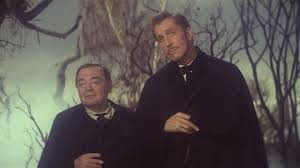