This is not a bad effort at all, 3.5 stars for a very watchable film. 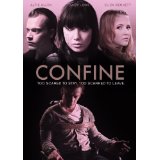 Confine is written and directed by Tobias Tobbell (Every Picture, Aimless) and tells the story of Pippa (Daisy Lowe – The First Days of Spring), an emotionally and physically scarred former model, hiding away from the world in her flat, unable and unwilling to let her new face be seen in public.

Her safe little existence is brutally shattered with the arrival of the psychotic yet strangely charming Kayleigh (Eliza Bennett – Inkheart, Nanny McFee), a criminal on the run, who chooses Pippa’s flat as a place to hide out. Things take a turn for the worse with the arrival of Henry (Alfie Allen – Game Of Thrones, The Other Boleyn Girl), an accomplice whose presence leads Kayleigh to even greater heights of depravity.

The story centres around the growing relationship between Pippa and Kayleigh and the way in which Pippa begins to find herself again through adversity. 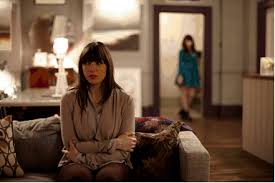 The acting performances are excellent, especially Daisy Lowe, a relative newcomer in her first starring role. The script is well written and builds tension nicely, not easy given that there are so few characters involved in the story.

This is never going to be a classic, but it is an enjoyable watch and well worth a look.