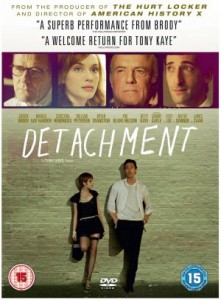 A stark look at the stresses and strains of all the occupants of the school, from the ones that crack, Dr Doris Parker (Lucy Liu), to the ones that take medication to bend, Mr Charles Seaboldt (James Caan) and those that believe they have something to prove such as Andy (Kwoade Cross,) but most importantly there are those who try to remain detached, we introduce “Henry Barthes.”

As soon as this film opens, you know it is going to be good, as a camera trains on Adrien Brody (King Kong 2005), who plays  Henry Barthes, a supply teacher giving an interview to someone off screen and these pop up throughout the film, giving insights into his psyche in the various situations he finds himself in.

Henry’s first encounter at a failing school run by Principal Carol Dearden (Marcia Gay – Mystic River) is with Andy, (Kwoade Cross – Person of Interest) a young man with a big chip on his shoulder. He deals with it in a disconnected way, which sets his tone for the job ahead.

The interactions with all the characters are many and varied and all acted well. You can’t hurt Henry, because he has been hurt before and the dark history of his Mother and the relationship he has with Grandpa (Louis Zorich – Death of a Salesman 1985) keep him firmly within this mindset.

But he shows a compassionate side by taking under his wing a young prostitute Erica, (Sami Gayle – Stolen), letting her stay in his sparse apartment. It becomes complicated and this leads to a different path for one of them.

An ace film and deserves a place in your collection.

Available to buy on Blu-ray and DVD From February 4, 2013