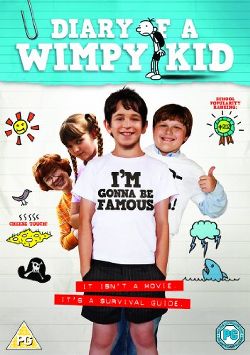 This film is actually better than I expected it to be. I have given it 3 stars, not because I think it is ever going to be a classic, but because it does what it says on the tin.

The film is based on the best selling book written by Jeff Kinney and tells the story of a young boy going through middle school. Although this pitches the film at a very specific age range, anyone in that age group will thoroughly enjoy this film, probably feeling glad that ‘it’s not just them’. It also has something for the parents as well however, in that everyone has been that age at some point and can therefore identify with this on some level (i.e. Thank god I’m not there anymore!).

The film itself deals with all of the issues you would expect, bullying, friendship etc, and manages to do so in a way that is not as moralistic as some that I have seen.

The book transfers very well onto the big screen, and although this is a live action feature and the book is in cartoon form, the characters are all easily recognizable and the overall feel of the book is retained.

The performances are all excellent, especially from the young talent. The film stars Zachary Gordon, Robert Capron and Chloe Grace Moretz (Let Me In, Kick ass) who plays a character which was added purely for the film.

The DVD package is pretty good, although there are not many special features on the disc (some deleted scenes and a theatrical trailer), included with the DVD is a copy of the book on which the film is based.

In general, I would say that if you are 12 years old, you could do a lot worse than watch this film!

The film is available to buy, from Amazon, on DVD