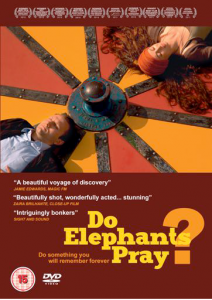 This is not a film that I would ever have even considered, let alone watched, but I am very glad that I did.

Do Elephants Pray? is directed by Paul Hills (Boston Kickout, Mad In Tokyo) and written by the star of the film, Jonnie Hurn (The Zombie Diaries, Monk3ys) and within the first ten minutes you begin to realize that this is going to be a wilder ride than you ever expected it to be.

While attending his Tai Chi classes, he meets up with the wonderful Malika, played by Julie Dray (Another Woman’s Life, Land Girls), a free spirited and unstoppable force in the form of a beautiful and possibly slightly crazy French girl, bent upon taking him away from his mundane existence and showing him the true meaning of life.

Over the course of just a few days, from the eye-opening intro sequence of Callum running naked (full frontal) through the forest, startling the local wildlife, to the culmination of several days roughing it in a forest in rural France, this is a journey that will change everything and when watching this you cannot help but be drawn along with them on this trail of enlightenment.

Do Elephants Pray? Well you’ll have to watch the film to find out, but I can assure you that the answer will be well worth the wait.

This is a truly great piece of film making, awesome script, better acting and a brutally honest story-line, it really doesn’t get much better than this.

Thoroughly recommended, go out and buy it, this is a keeper.

Do Elephants Pray? is available to buy on DVD from 20th May 2013