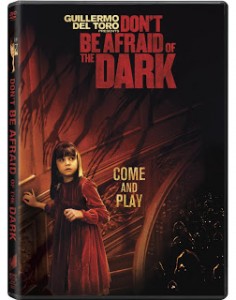 Don’t Be Afraid of the Dark is rather disappointing on a number of levels and because of this I have given it 3 stars.

This is the latest release from Guillermo Del Toro (Pan’s Labyrinth, Mimic, Hellboy) and as such there was quite a lot of anticipation. However, it doesn’t live up to the previous offerings. It just doesn’t seem to be as well thought out as his other films. Although it is entertaining to watch for the most part, there are quite a lot of holes in the story-line, things mentioned and then seemingly forgotten about and cast aside.

Don’t Be Afraid of the Dark is a 15 certificate film and is a remake of the 1973 horror film of the same name. The story is about a family who move into a new home with their daughter only to discover that there are dark and sinister secret in the cellar, pretty standard fare for the genre, but still quite enjoyable to watch.

It does feature a reasonably impressive line-up of actors, Katie Holmes (Batman Begins, Dawsons’ Creek), Guy Pearce (Memento, The Hurt Locker) and Jack Thompson (Star Wars episode II; Attack of the Clones, The Good German). However this is unfortunately not enough to save it.

All that being said, there are a number of things in it’s favour, the special effects most noticeably, which are excellent, hats off to the the creative team for the creatures too, they are scary even when you get a really good look at them.

There are a number of special features included on the disc; The Story, The Build, Character Profiles: Alex, Kim, Sally, Theatrical trailer.

All in all this is a generally enjoyable film, watchable but not stunning, but still worth a look if you are prepared to disengage your brain.