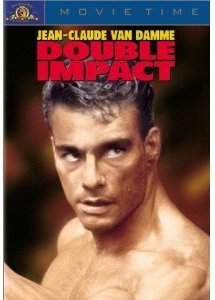 Double Impact is an entertaining film and Jean-Claude Van Damme is a very talented martial artist, so for this reason I have given it 2.5 stars.

Double Impact is a classic action film, made in 1991 and just now being released on DVD. It is very typical of the era and has all the right blend of action and comedy (although I’m not sure the comedy bit is deliberate), proper early nineties cheese in other words.

The film is written and directed by Sheldon Lettich (Rambo III, Bloodsport) and stars Jean-Claude Van Damme in the two main roles of Chad and Alex, twins separated at birth by murderous Hong Kong cartel members. The story, such as it is, revolves around their re-union and attempts to right the wrongs that have been done to them. If you think that doesn’t sound like the best idea ever for a story, you’re right.

The acting in the film is frankly atrocious for the most part, Jean-Claude Van Damme may be an amazing martial artist but he’s no actor. Double Impact also stars Alonna Shaw (Cyborg Cop, The Take – both t.v. movies) and Geoffrey Lewis (The Devils Rejects, Maverick), who is probably the only redeeming feature acting wise, but carrying everyone else was too big an ask even for him.

Special effects. Well, I imagine that in the nineties they would have looked pretty impressive, but having the same actor play two characters who have to be seen together brings its own difficulties and they are made even more obvious when watching this film on DVD.

There are unfortunately absolutely no special features included on the disc whatsoever, rather disappointing these days. However, having said all that, there is no denying the fact that Jean-Claude Van Damme films are always worth watching for the fight scenes, all of which are choreographed to perfection by the man himself, and for this reason alone this one is probably worth having.

Double Impact is available to buy now on DVD.