This is an excellent film, 4.5 stars for this gritty, fast paced thriller. 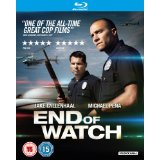 End Of Watch is a documentary style film, written and directed by David Ayer (Training Day, The Fast and the Furious).

The film tells the story of two cops, partners and friends, who patrol the streets of Los Angeles together. We follow them around through their daily routines, occasionally being thrown right into the middle of the action with no warning (much as you might imagine it would actually feel if you were out on the streets).

The documentary feel certainly wraps you up in the chase and the colour palette used makes everything, the most mundane or the most horrifying scenes, seem beautiful.

The story line is excellent and the script is very well written, at no point does it feel contrived. The acting is every bit is good as you would expect from looking at the cast list and it is quite easy to forget in places that you are not actually watching a documentary.

There are no shortage of stars in this film, Jake Gyllenhal (Donnie Darko, Source Code), Michael Peña (Shooter, The Lincoln Lawyer), Anna Kendrick (Up In The Air, Pitch Perfect) and Natalie Martinez (Death Race, Saints and Sinners), to name but a few.

End of Watch is a hard hitting thriller that will appeal to plenty of different audiences, great film to add to your collection, and certainly one that you will come back to again and again.