4 stars for this heartwarming and funny film. 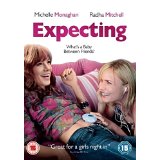 Expecting is written and directed by Jessie McCormack (The Antagonist, The Amateurs) and deals with the tricky topics of I.V.F. failure and adoption and the ways in which they can affect people, in a way that is both bold and funny.

Lizzie (Radha Mitchell – Silent Hill, Pitch Black) is desperate to have a baby with her husband Peter (Jon Dore – Mash Up, My Life As An Experiment), 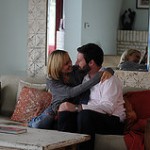 but after four rounds of I.V.F. it is becoming increasingly apparent that it just simply isn’t going to work. The constant failure is causing all sorts of problems for the couple, who are under the care of Dr. Grayson (Mimi Kennedy – Due Date, Midnight In Paris), a marriage counsellor  with some very unorthodox but hilarious methods. 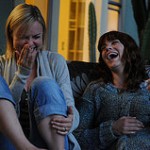 To make matters worse for them, Lizzie’s foul mouthed, fancy free and very single friend Andie (Michelle Monaghan –  Source Code, Due Date), falls pregnant from a one night stand. Feeling guilty about rubbing their noses in it, Andie decides to make the ultimate sacrifice and offers to give them her baby.

In order that she not be alone during the pregnancy, Lizzie moves her into the house with herself and Peter. 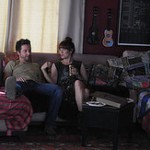 Add to the mix the sudden appearance of Peter’s dysfunctional brother Casey (Michael Weston – The Dukes Of Hazzard, State Of Play), who has just been released from rehab and a crazy dog called Joyce, you have a recipe for mayhem and hilarity.

Expecting is really well written and the actors have a lovely natural chemistry between them, which makes the comedy flow and makes what would be a lot of very awkward scenes work without too much cringing.

It is both thoughtful and charming, perfect for a girl’s night in and highly recommended to add to your collection.

“People give each other children all the time. If anything it’s passé at this point.” 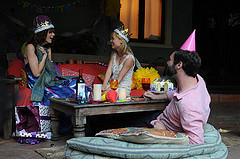