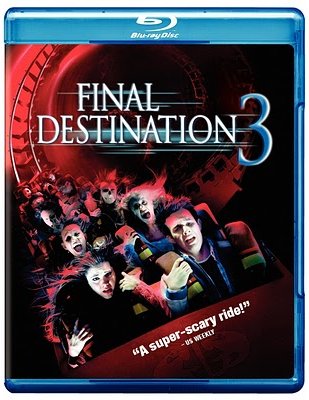 Final Destination 3 is a very entertaining film and I have given it 4 stars.

This is, obviously, the third film in the series and I feel if anything it is better than the first two. For those of you who haven’t seen the others yet the basic premise is, teenager has premonition of impending doom, thus saving several of their friends from a grisly death. However, death does not like to be dodged and comes for each of them in ever more entertaining ways.

The event avoided in this version is the crash of a roller coaster full of teenagers at a theme park. I found that they seem to be getting the hang of working out a chain of events much better with this film, to the point where some of the sequences are more like watching the Honda advert [This one? – Ed] and it is very difficult to work out which of the elements of their surroundings are most likely to be the cause of death.

The film is directed by James Wong (The One, The X Files) and features excellent performances by it’s young cast (no-one from the previous films this time, except for a voice appearance from Tony Todd). These include Mary Elizabeth Winstead (Die Hard 4.0, Death Proof), Ryan Merriman (The Ring 2) and Kris Lemche (eXistenZ, My Little Eye).

Again, as with the second film there is a noticeable difference in quality and clarity between the DVD and Blu-Ray versions of the film. However both versions offer an impressive array of special features;

All in all, if you enjoyed the previous Final Destination films you will definitely enjoy this one. If you haven’t seen them but you are a fan of the teen horror genre then this is also a must see, as it works just as well as a stand alone film. Heartily recommended, get the popcorn in!