3 stars of grisly but a bit silly horror. 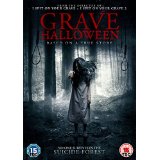 Grave Halloween is written by Ryan W. Smith (Mr. Young) and directed by Steven R. Monroe (I Spit On Your Grave 1 and 2, The Wonder Years).

Set in Japan, the majority of the story takes place in a deep, moody forest at the base of Mount Fuji. Known to the locals as The Suicide Forest, understandably most people are quite reluctant to venture there. 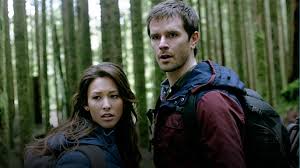 For some unknown reason, the suicide rate in this particular forest is higher than anywhere else in the world. 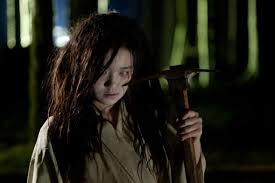 She has received in the post a small jewelry box, containing a few personal effects, along with a photo of the spot where she died and a letter requesting that she hurry to the Suicide Forest on Halloween that very year to perform an age old ritual that will save the soul of her mother and prevent her becoming trapped with the other lost souls.

In true horror film style, Maiko decides to allow her friends to turn it into a project, so she and three of her fellow students strike out together to make a film about the whole sorry affair (and we all know how well that usually works out). Amber (Cassi Thomson – Cop Dog, Big Love) is her best friend and the director of the project. 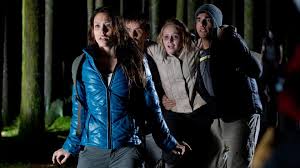 Terry (Dejan Loyola – Evangeline, Best Player), another friend is along to act as the sound guy and Kyle (Graham Wardle – Heartland, Yesterday) has stepped in at the last minute to help out as the camera man, treacherous enough given that filming is strictly prohibited.

Predictably enough, Maiko soon begins to experience strange visions, and they are forced to flee the police who are clearing away the bodies, but things seem to be looking up when they meet Jin (Hiro Kanagawa – Godzilla 2014, Elektra), who knows the forest and offers to escort them. 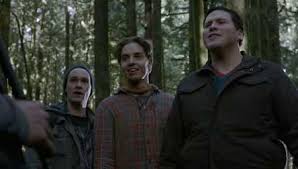 But it all begins to go wrong with the unwelcome appearance of Brody (Jesse Wheeler – Diary Of A Wimpy Kid), Skylar (Tom Stevens – 12 Rounds 2: Reloaded) and Craig (Jeffrey Ballard – Mission To Mars), three idiots from the University, there to play a Halloween prank on their class mates. The Suicide Forest is, however, the last place where you should be risking angering the spirits and all hell will soon break loose.

Will Maiko be able to complete the ceremony and will she learn the truth about her mother’s suicide? More importantly, will anyone make it out alive? 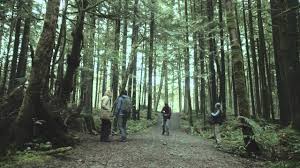 As horror films go, this is better than a lot that I have seen, the acting is actually pretty good and the script is well written. There is also plenty of gore, although some of it is a bit dodgy and the atmosphere of the forest is genuinely creepy.

The story is of course extremely daft and full of loop holes, and the majority of the characters have the survival skills of your average Lemming, but that’s to be expected and the rest of it is good enough that it kind of gets away with it.

With Halloween just round the corner, this kind of popcorn, turn off your brain at the door feature is just what the doctor ordered – turn off the lights and prepare to be spooked and amused!

“Sometimes you get lost in the forest and sometimes the forest loses you.” 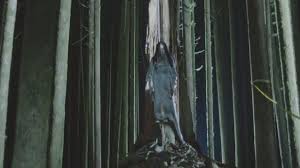 Grave Halloween is available to buy on DVD from 27th October 2014.