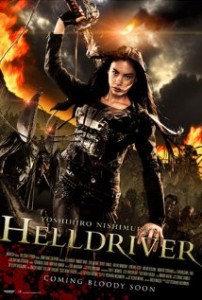 Helldriver is a delve into the mind of the director Yoshihiro Nishimura ( Tokyo Gore Police, Vampire Girl Vs Frankenstien Girl), whose vision of zombies is totally different than that of the West.These zombies have some intelligence and a sense of twisted fun.

The story really starts with a feuding family, seeing daughter Kika (Yumiko Hara) and her mother Rikka (Eihi Shiina, Audition and Tokyo Gore Police) fighting over the way Rikka treats her husband and herself. As they fight, they do not spot a flaming meteor heading straight for them; it hits Rikka, passing straight through her, but strangely does not kill her but she believes she is now deficient, she promptly removes her daughters heart and places it in the void in her body. This is where the blood starts flowing (this is a splatter film after all).

After this, ash is released from the frozen form of Rikka and this infects the North of the island, turning everybody into zombies with melon stems sticking out from their foreheads.

The South of the island want to treat all the infected people as human beings until the president re-categorizes them as zombies. (This where you get the opening credits, 43 mins in).

Kika and a small band of fighters are given the task of removing the zombie queen ( her mother) thus permanently removing the source of the infection. this is when the gallons of blood start to appear and all the way through the film. ( marvelous stuff!)

Yoshihiro puts heart and soul into the making of this film as Kazuki Namioka (Kaito) says, “As it’s entertainment, the more absurd, the better it is.” And I have to agree.

This genre may not appeal to all horror/sci fi fans, but I think its well worth a try.