0.1 star for this atrocious “horror” film. 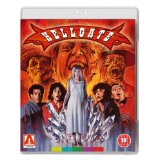 Hellgate was first released in 1989. It is written by Michael O’Rourke (Moonstalker, Deadly Love) and directed by William A. Levey (Blackenstein, Skatetown, U.S.A). It is an eighteen certificate, although it is quite difficult to imagine why.

This is the story of Josie, played by Abigail Wolcott who was, quite magnificently, never in another film after this one. I can only assume that she watched Hellgate and subsequently died of embarrassment. 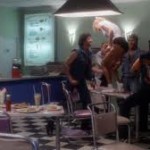 Josie is abducted from a diner by a motorcycle gang and brutally murdered. One of her Father’s employees discovers a mysterious crystal in a mine, which can re-animate the dead. Having resurrected a plastic bat on a string, he takes the crystal to his employer who comes up with a cunning plan to resurrect his dead daughter and use her to lure men to his ghost town, Hellgate, so that he can kill them. 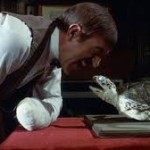 He also resurrects a turtle, which bites his face and seems to lead to him inexplicably having bits of metal riveted onto him. Four friends come into town and find themselves caught up in his schemes.

If you think all that sounds just a little bit ridiculous, that’s because it is. The acting in Hellgate is by far the worst I have ever seen. In fact the stand-out performance was from the turtle, who deserves an Oscar in comparison to his human counterparts. The leading lady whose only real task was to be a bimbo fails even at that (she runs like Forrest Gump, not a good look for a lady).
The whole thing is so eighties it’s almost painful to watch. The town of Hellgate looks like some dodgy American theme park, complete with zombies and just about every other horror cliché you can think of. There is plenty of latex and ketchup employed, but it doesn’t result in anything scary, maybe slightly pitiful if I’m being generous.

This edition of Hellgate is a limited release of only 1000 copies of the dual format version, featuring both original artwork and newly commissioned covers and may well appeal to both the clinically insane and the deaf/ blind. And no, I won’t be watching it again!

I leave you with a picture of our star. 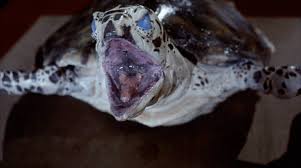