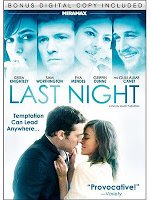 Last Night is a pretty take it or leave it kind of film and for this reason I have given it 3.5 stars.

The theme of this film will feel very familiar to anyone accustomed to watching this genre, it has been covered many times and is frankly nothing new. The tale, written and directed by Massy Tadjedin (The Jacket), tells the story of a young married couple, one of whom is going on a business trip with a sexy work colleague and the other one who bumps into an old flame while her husband is away.

As you can imagine, Last Night then goes on to show how they each deal with the situations in which they are placed. There is nothing fundamentally wrong with the writing or the script, it just fails to captivate.

There are a number of excellent performances in the film, notably Kiera Knightley (Pirates of the Caribbean, Love Actually), Sam Worthington (Avatar, Clash of the Titans), Eva Mendes (Hitch, 2Fast 2Furious) and Guillaume Canet (The Beach, Tell No-one) as the couple and their potential love interests.

Included on the disc are the special features: Making Of featurette and Theatrical trailer.

All in all I would say that if you are into this kind of film and have enjoyed others in the same vein then you will probably like Last Night, but it certainly isn’t for everyone.

Last Night is available to buy now on DVD