4 stars for this very funny and cleverly thought out comedy/ horror film. 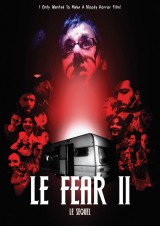 Le Fear II: Le Sequel is exactly what it says on the tin, the sequel to Le Fear, which was a mega low budget film, released in 2010.

Written and directed by Jason Croot (Le Fear, Roberto), who also appears in the film himself as the volatile and elusive script supervisor Chafarafa, this continues the story of the naive and hapless film director Carlos Revalos (Kyri Saphiris – Le Fear, I’m Still Here). 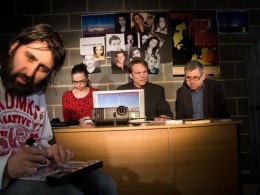 From the outset it’s obvious to the viewer that his decision to attempt to make another, higher budget film after the disaster that was Le Fear, was at best flawed, at worst doomed to failure.

The film opens with a meeting between Carlos and his prospective backer, the money man, Dirk Heinz (Andrew Tiernan – 300, The Pianist), who tells him all about “Nollywood” and how it is the next big thing in the download industry. 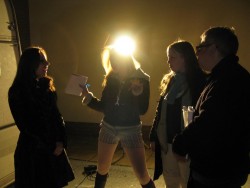 In return for £500,000 of Carlos’s hard earned cash, Dirk offers him £10,000,000 of backing for his film, provided by unknown construction moguls in South Africa which he eagerly accepts. What could possibly go wrong?

6 months later, we find out. When he is met from the train at Clapham station by the enigmatic cinematographer Jacques (Hadrien Mekki – Patchanka, Sue Ellen) he is full of hopes for his upcoming venture and dying to see the film set that he has been promised. 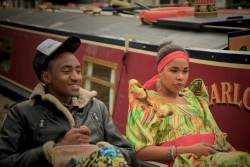 However, when he arrives, he is understandably disappointed to discover that it is in fact a caravan outside a unit on an industrial estate. Not quite what he wanted for his £500,000 pounds.

It’s all downhill from there. As his motley crew begin to arrive, the chances of getting any even half decent results become increasingly remote. His producer Efi (Seye Adelekan) would far sooner use his phone and socialize than produce anything, his special effects expert Africa (Roxy Sternberg – It’s A Lot) thinks that inflatable aliens are scary and his acting talent are less than impressed with the general setup. 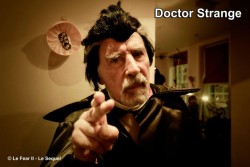 Throw into the mix a make-up artist who will bang anything with a pulse, a vampire who won’t do any stunts and a witch doctor and you’re in for a wild ride.

Le Fear II: The Sequel is a refreshing departure from the massively over-cliched comedy horror of the last few years. Rather than take the mickey out of other people’s stories, it instead takes a candid and very amusing behind the scenes look at the process of making an independent horror film, seemingly more horrifying than the film could ever be.

Thoroughly enjoyable from start to finish, what really makes this film is our hero Carlos Revalos, whose dead pan expression and calmness in the face of staggering ineptitude are nothing short of legendary. You really can’t help but feel for this poor idiot, so naively handing over his entire life savings.

A great watch and one that comes highly recommended.

Le Fear II: Le Sequel will be released across the UK in April 2015, watch this space for further details as they become available.