Well that was a complete waste of a morning. I’m going to give this 0.5 stars, simply because it seems rude to give it none at all. 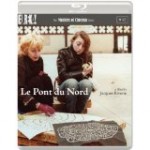 Le Pont Du Nord was first released in 1981 and is directed by the”masterful” French director Jacques Rivette (Va Savoir, Celine And Julie Go Boating) and is taken from his so called legendary middle period. I sincerely hope never to have to watch a film from any of his other periods, or indeed another from this one. If that is the culmination of his work, I dread to think what delights led up to it. 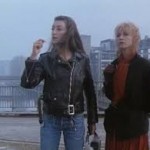 On her release, Marie meets with her ex-lover Julien (Pierre Clementi -The Leopard, The Conformist), who is carrying a mysterious document wallet. Baptiste swaps this wallet for an identical one and between them, Baptiste and Marie try to piece together the maps and newspaper clippings within, which hint at some sort of sinister conspiracy (or that Julien likes to collect newspaper clippings – you decide).

The intro has got to be one of the longest and most boring I have ever seen, if I wanted to see the Paris Tourist Guide I would buy it. It would seem that we have cinematographer William Lubtchansky (Shoah) to thank for the arty if somewhat nauseating opening sequence, where we are forced to watch as Baptiste rides around on her scooter and the camera swirls around her, occasionally settling on a statue of a lion.

Le Pont du Nord may well be just the thing for die hard fans of French cinema, but in my world silly string is not a weapon, and the first response upon finding a dead bloke dressed in ladies clothes should not be to put pieces of grass on the body.

As you can see from the above clip, it has simply been copied to DVD and Blu-ray with no visible re-mastering of any kind, the picture and sound are both terrible, grainy and with some very bizarre camera tricks.

Unless you are heavily into New Wave French cinema and recognize any of the above names, I wouldn’t bother with this one.