4 stars of gory and explicit horror. 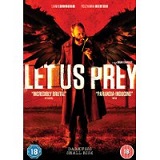 Released just in time for Halloween, Let Us Prey is a joint Scottish and Irish production, written by David Cairns (Natan) and Fiona Watson and directed by Brian O’Malley (Crossing Salween).

Let Us Prey is set in the small Scottish town of Inveree. One night, as the town goes about it’s business, a stranger (Liam Cunningham – Game Of Thrones, Safehouse) emerges, seemingly from the sea, in the midst of an ominous cloud of crows. 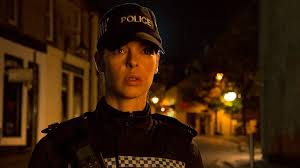 This is the night that PC. Rachel Heggie (Pollyanna McIntosh – The Woman, Exam) starts her new job. As she heads to the station, she witnesses a young hoodlum, Caesar (Brian Vernel – Offender) hit the stranger with his car. There is no sign of the man he hit, but there is blood on his car, so she takes him into custody.

Her boss Sgt. MacReady (Douglas Russell – A Lonely Place To Die, Valhalla Rising) isn’t surprised to see him as he is a regular customer, so he escorts him to the cells, where he is rather upset to learn that his fellow inmate is his teacher, Ralph Beswick (Jonathan Watson – Filth, Local Hero), being held on charges of wife beating and who Caesar firmly believes is a paedophile. 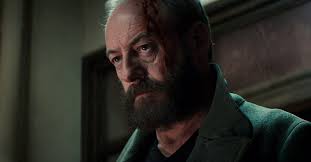 The other two cops, PC. Warnock (Bryan Larkin – Outpost: Rise of the Spetsnaz) and PC. Mundie (Hanna Stanbridge – Outcast) are more busy having sex in their patrol car than working, but eventually, they are prevailed upon to mount a search for the stranger, who is wandering the streets injured.

When he is found and brought into the station, things begin to get weird, Dr. Hume (Niall Greig Fulton – The Anomaly, Cloud Atlas) is called to look him over, but reacts violently when he looks into his eyes and ends up taken to the cells himself.

It soon becomes apparent that the stranger has some sort of ability to look into the very souls of others and see their misdemeanors. And the good people of this town, indeed this police station, have some very dark secrets to hide, which must and will be exposed before midnight, when judgement will be served.

Let Us Prey is an excellent film, well written and with some fantastic performances, most notably from Liam Cunningham, who is nicely understated and Douglas Russell, who does crazy far too well. 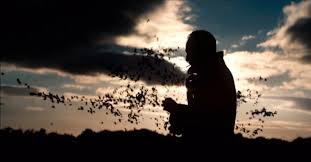 The story is interesting and kept me engrossed right to the end and it is very nice to see a good British production. The horror is very real, very personal, with brutal attacks and graphic scenes throughout, which more than earns it the 18 certificate.

Not one for the faint hearted, but if you enjoy a good horror then this one is for you.

Let Us Prey is available to buy now on DVD.