4 Star A War Film for the Thinking Person. 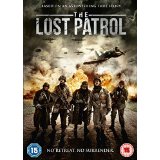 After taking a heavy losses to the German U-Boats, Brazil Joins the Allies and send 25,000 men to join the fight against the Germany, Italy and Japan. Set in Italy in the freezing winter of 1944 clearing mines for the allies. Totally unprepared for the horrors and hardships of war these men must become soldiers.

Hold -up in the dark, freezing and trying to clear a mine field, everybody hates the feeling of impending doom, especially Piaui, (Francisco Gaspar, Caixa Preta) who sits in the corner swaying saying the Germans are going to kill us,

over and over annoying everyone, except those outside lying in the snow trying to find the mines in the field. We hear Guima, (Daniel De Oliveira, Boca) narrating a letter he is sending back to his parents back in Brazil, (this happens many times during the film), he is the third of three engineers in the squad clearing the mines.

chased to the demise of the two engineers leaving just Guima.

The squad are scattered in the dark and miss each other as they all try to make it down the mountain, unable to get in touch with their unit they wander the forests until the half crazed Piaui is caught by Guima and silenced before the Germans can here him.

Sgt. Laurindo, (Thogun, Buddies) barks out the orders even though Lieutenant Penha, (Julio Andrade, Obra) is in charge and this a constant annoyance to him and the others as well. Once reunited they realise that they will now be considered as deserters and face a court martial. But while trying to get through on the radio they hear that Road 47 has been mined and the Americans have taken casualties and cannot get through to the town of San Giusto, a place where the Brazilians could get back to the front line.

But they don’t know exactly where the mines are until they come across a Brazilian reporter Rui, (Ior Canelas, Call Girl) an Italian deserter trying to get to the Partisans and a disillusioned German Captain Mayer, (Richard Sammel, Casino Royale) that after a fire fight joins the band as they head across the desolate snow covered mountain in a vain attempt to get their place back in the army.

You have to have your wits about you when watching this film as they speak so fast that the subtitles are gone in a flash to be replaced by the next lines. But well worth the perseverance as this is a journey into the human psyche of survival at all costs.

No Retreat No Surender

“You Live, You Die. Just pray you do not pass through hell before you get to the end.”