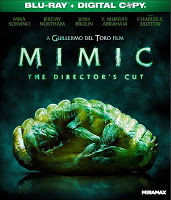 Mimic is an extremely entertaining film and this new release is no exception to that, so I have given it 4 stars.

Mimic is a suspense thriller, set in Manhattan and centered around an entomologist who seeks to put an end to a disease carried by the common cockroach by genetically engineering a species which can destroy it. However, the plan goes wrong (of course!) and they mutate and begin wreaking havoc on an unsuspecting populace.

The settings are very well thought out in Mimic, dark and brooding and they capture the atmosphere perfectly, adding to the suspense and sense of excitement. There is also plenty of action here for fans of things that make you jump and especially for fans of goo.

Now to the Blu-Ray release version. The Directors Cut adds quite a quantity of new material as compared to the theatrical release and helps the film to flow better. There are certainly various aspects which make more sense in the extended version. In terms of visual effects it is difficult to find any noticeable improvement from the DVD, however neither does it appear to have suffered for the transfer.

One thing that the Blu-Ray does boast however is an impressive array of special features; Video Prologue with Guillermo del Toro, Reclaiming Mimic, A Leap in Evolution, Back Into the Tunnels, Deleted Scenes, Storyboard Animatics and Gag Reel.

If you are a fan of sci-fi/ horror/ suspense thrillers then you will love Mimic, it ticks all the boxes and is an old but well loved member of our film collection.